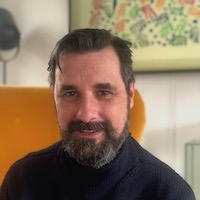 I'm Jonny Green. I've been in the digital industry for over 25 years now, fluctuating between software development and management, including an 8 year stint running my own digital agency plus several more years contracting.

For the last few years, largely inspired by Ember, it's the development that's getting more focus. Currently I'm an Engineering Manager at Phorest Salon Software. Although there's a huge amount of serendipity around why I work and love working at Phorest, their use of Ember was the initial draw.

Originally from Wales - then living in London for many years before making the break for the country about 8 years ago and now living in more rural surrounds about an hour out of London.

A former employee and colleague of mine, Jamie White (organiser of Ember London a few years back), was a big fan and involved in Ember from quite early on. Jamie and I had worked together on a lot of Flash ActionScript projects back in the day. Although Flash has quite rightly been consigned to the digital dustbin of history, it did challenge conventions in terms of what was possible in a browser. I think Jamie recognised that would be its appeal to me, which eventually it was.

After the heyday of Flash, we understood we needed to build more open, accessible, standards-driven apps but missed the single, seamless environment of Flash. The development process instead became very fragmented with the need to dip into different technologies and libraries. The ingredients changed constantly too, meaning returning to legacy projects was tough.

Ember presented a holistic, opinionated way of working which allowed us to meet the modern requirements of UI whilst daring to dream again about what was possible in the browser.

It was my go-to book for many years, initially to work through on my own to learn about Ember, then as a regular source of reference. Closure actions were something I found myself returning to a lot, partly because they were quite a head-scratcher and partly because Balint's examples were so good. Thankfully, the community recognised this pattern as a cause of issues for learners and it's altogether more straightforward in Octane.

I think the @use RFC. I like the way that Glimmer components stripped everything back. It allowed a sense of perspective on what actually needs to be there, and then if required to bring things back in a potentially better way. So for example, whilst the removal of many life cycle hooks felt quite brutal at first, and left a few gaps, @use promises to solve those problems in a better way.

Well the book is essential of course, though also, as a consultant, I selected Ember for a few projects and then hired Ember developers as leads to build them. I then worked "under" the developers I hired as a junior developer.

It's an unconventional strategy and you have to have a strong, honest, mutually-respectful relationship with the developer you hire. It took me a couple of attempts to get right to be honest, though when it worked, it was great. It gave me the ability to learn on live projects and be confident and have control that what was being developed met the project brief.

Yes, a few years back I built a loose framework using Ember around the headless CMS Contentful to develop smaller client projects. These were typically content-managed marketing and corporate websites that weren't enough to justify the use of a JavaScript MVC framework.

However, I loved working with Ember on the bigger projects and it was always a pain to context shift to the smaller projects where a plethora of tools were in use, but none of which quite seemed to do the job as well as Ember. Also, I understood that projects of this nature have an unerring tendency to scale in terms of features and expectation. Without the power tools of Ember under the hood, meeting those increasing expectations is a challenge prone to producing sub-standard, Frankenstein solutions.

As a front-end developer usually working on my own, this model also meant I didn't have to worry about the development of a back-end, or the mainentance of it. Once up and running, it can essentially carry on without developer assistance or intervention.

One example left of that model is the website I built for my wife, www.heatherpollington.com.

Were there any challenges or stumbling blocks while you were building your app(s)?

I remember spending a long time getting Mirage to work against Contentful, which doesn't use any recognised json format.

How much time do you have to work on that project (those projects)?

None any more - but that's how they were designed. To run alone.

I've got massively into WattBiking with Zwift. I was already working remotely prior to lockdown, and my lack of movement and exercise was already bad enough. I would run frequently enough though it's necessarily quite seasonal where I live (either unlit roads with no pavements or boggy fields). For me, Zwift is the perfect marriage of exercise and tech.

In the past it would have been my own site but hey, the real world of full-time work has kind of stopped that. Going forward, it's my resolution for 2021 that you will be able to hear from me on Nothing Ventured, Phorest's blog.