The most up-to-date book to learn Ember Octane 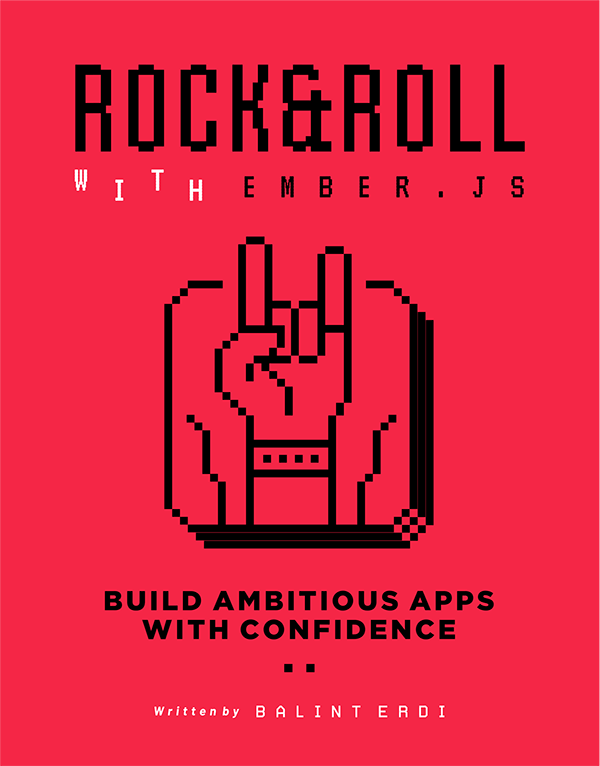 Ember.js is a kick-ass framework for building web applications. It's the only tool you need (on the client-side) to craft your idea into a working wonder. However, its strong opinions and heavy reliance on “convention over configuration” can give developers who are new to the framework a hard time figuring out how Ember wants them to do things.

This book helps to overcome that initial frustration, and help you grok Ember a lot faster, by pinpointing the core concepts and explaining them in detail. Once you understand them you are on your way to taming and mastering Ember.js. So don't fear the learning curve.

This book -- like Ember itself -- is for teams and individuals who want the productivity boost that comes from shared community solutions. Instead of reinventing the wheel, use Ember. Instead of scouring the web for advice on how to use Ember, read this book.

The book guides you through the steps of building a real application so that you can see how the concepts are applied in practice. You'll learn about the building blocks of Ember one by one, in a way that crushes the steep learning curve. Knowledge is dripped in slowly, chapter by chapter, to prevent you from drowning in a sea of novel information. By improving an existing and working application, you will learn more quickly and new knowledge will sink in deeper.

Already convinced? Skip to the packages.

Are you a student? Check out my student discount.

This book is a fabulous, approachable, foray into Emberjs that makes the learning curve much less scary. I just wish it had been available sooner for students in my previous classes.

— Matt Hale Assistant Professor at the University of Nebraska

Few programming books have left me with the comprehensive "big picture" understanding that this one did. It completely made me fall in love with #EmberJS, and introduced me to an incredible community of developers and friends. 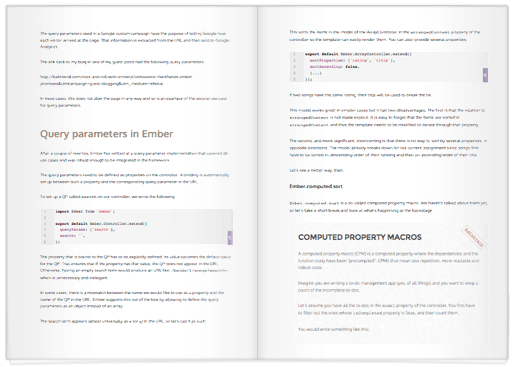 Thanks! Now check your email.

It all started in September 2013. Having just returned from the first European Ember.js conference, my enthusiasm went through the roof. I wanted to spread the word, for people to realize how beautiful Ember is, for them to know that Ember.js is not that hard to learn. It's just a matter of having the core concepts internalized.

So without proper equipment (and after a few episodes, with a ~$80 mic) I started producing screencasts, a series in which a simple application is developed step-by-step. I sent the first few to my subscribers and kept producing them. And people seemed to have liked them.

Once the screencast series was finished, I switched to blog posts and lengthier articles, and in 2014 I committed to posting something of value each week. Then, after a long labor of (mostly) love, I published the 1st edition of the book in Feburary 2015, that used the then stable Ember version, 1.10.

I was not done, though. As Ember made progress in a neck breaking pace, I kept the book up-to-date with the actual stable version of the framework, and adding material that covered the new features.

Version 2 of the book, that is running on Ember 2, was published about 6 months later and I've been updating the book for every minor version ever since.

Buy once, get all minor updates for free

The first edition of this book followed Ember's journey to its 2.0 release. As Ember gracefully shedded old syntaxes, the book's content was updated not to use those syntaxes, either. When a new feature appeared, I added a section about it, trying to find a practical example for it in the application.

Since Ember follows a 6-week release cycle, that meant frequent book updates in the past, free for all of my customers. I'll follow the same policy on the road to the next Ember milestone and keep the content fresh. It might happen –as it did– that I skip a version, mostly if no new features were introduced in Ember and no deprecations were made.

I have to say Balint has done an outstanding job with his ebook. The product and his most excellent support and follow-through (including regular updates to the content) have all felt seamless and caring from the customer’s end. A class act all around.

I just joined a new company that very recently upgraded to 3.18, so I've had the "pleasure" of having to learn pre and post Octane styles of Ember simultaneously - your book has been a lifesaver.

I've been raving about the book with my teammates, and I'll make sure new hires start with your book just as I am doing now.

Click on chapter names to see a detailed ToC.

For a week now, Rock and Roll with Ember.JS has been my cuddle buddy. Every day I find a cozy spot, pour tea, and dive deep into Ember. Reading isn’t my preferred learning style; however, this book has an amazing hands-on section! It allows you to try your hand at each concept instead of just reading about it. I’m almost done with the lessons and I am happy to say I’ve learned a ton!

It's great that there's an up-to-date resource on Ember, apart from the official docs. For me, the documentation works best as a reference when you already know what you're doing. For learning I prefer a dedicated resource - a book or a video course, which incrementally guides you towards proficiency. 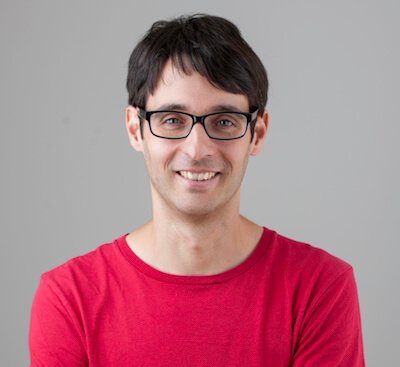 I have a long history of building web applications and have mostly been a back-end guy.

On a grey, chilly February day in 2013 that I’ll never forget (maybe it was January?) I got acquainted with Ember.js. Ember.js made that day bright and the ones that came after that. After learning the ropes I shifted gears and have been proselytizing for Ember since that summer.

I gave workshops at EmberConf and Eurucamp, and presented at EmberConf, EmberFest, AgentConf and Arrrrcamp. I started an Ember.js mailing list, made an introductory screencast series and have been sending Ember content to my dear subscribers on a weekly basis. I have also written guest articles for Safari Books Online, AirPair, Firebase and Toptal.

I guess you could say I’m pretty passionate about Ember.

EmberMap is the maker of outstanding video series on a whole range of different Ember topics including contextual components, data loading, D3 charts and a whole lot more. I'm a huge fan (and subscriber) of the videos Sam and Ryan create. Buying any package gets you a 30-day free subscription to EmberMap (a $29 value)

This is what you absolutely need to get up & running with Ember.js Octane. Comes in pdf, mobi and epub formats for your reading pleasure.

You'll also get the last version of the Rock and Roll with Ember.js 3 book, just in case.

As Ember releases a new minor version about every 6 weeks, so do I. Pay once for the book, get all the updates for free until the next major Ember milestone*.

Deals that rock your world

A 30-day free EmberMap subscription, a 30-day extended trial period for Percy and a discounted "Unlimited Plus Projects" Surge plan

A pair of stickers

To show your support or just to pimp up your notebook.

The best rock songs. Great to code along with the book.

What else could be more fun than listening to these hits while learning a great framework?

Comes with no strings attached. Get it? No strings 🎸 attached. Sorry.

I really like it! It is super difficult to find the right balance between pacing and detail and put it all together in an understandable form but you pulled it off.

We at Foot Locker Europe find your book hugely valuable and use it to ramp-up new hires.

— Dennis Mende Sr. Manager Software Development, Foot Locker Europe
Buy now for $39
Need multiple copies for your team? Skip to the team licenses
Are you a student? I offer a student discount

You want code with that?

This gives you access to the source code repository of the app we build in the book. The end of each chapter is assigned the aptly named tag, so you can quicky jump to a chapter, check out the code or even tweak it to your liking (and to improve your learning).

One chapter, one commit

I thoroughly enjoyed the read and coding along with you as you introduced, built upon and refactored the code. It follows the way most people write their code, myself included, and I appreciated that thoughtful approach to your material. … I"ll conclude by saying this: your book immediately gave me the confidence to go full bore into our MVP using Ember, and for that I am truly grateful.

The book helped clarify a lot of things, especially new features and their deprecated counterparts. Such a great book, and looking forward to the next one!

— David Tang Author of Ember Data in the Wild
Buy now for $49
Need multiple copies for your team? Skip to the team licenses
Are you a student? I offer a student discount

Percy is a top-notch visual testing service, making sure that your site doesn't break visually when you refactor code/CSS or release new features. Buying the book gives you an extended, 30-day free trial to Percy.

Surge is a dead-simple static hosting solution where you can deploy your Ember apps in the blink of an eye. When you buy any book package, you get the unlimited Plus projects Surge plan for $24/mo (normally priced at $30/month).

I make new team members complete your book before starting on the project. Just thought you would like to know.

Thank you for writing this amazing book, it's such an excellent resource for our new hires!

Need multiple copies? The team license gives access to the above goodies and is good for a team of up to 20 people, for the price of 5.

The included EmberMap deal is also better suited for teams: it gives you access to their Small Team plan, for up to 5 users.

If you need a team license for more than 20 people, please get in touch with me.